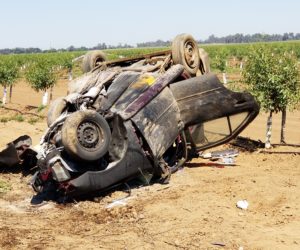 The driver of a Nissan Sentra was heading west on Yosemite Avenue the driver was trying to pass a big tractor-trailer and another car when he entered the eastbound lane of traffic and crashed head-on into a Honda sedan.

Both drivers from the involved vehicles were pronounced dead at the scene. A passenger in the Nissan was rushed to an area hospital but died a short time later. The driver of the Nissan was about 40-years-old out from Atwater according to CHP officer Zungia, the driver of the Honda was said to be a 46-year-old man out of Merced.

The 70-year-old woman was flown to a trauma center with major injuries. The names are being withheld until families have been notified by law enforcement. Alcohol or drugs are not believed to be involved in this accident at this time. Stay tuned for further information once CHP releases names.

One thought on “UPDATE ON FATAL HEAD-ON CRASH IN MERCED”